I must admit, a major part of the motivation for traveling to Oregon was to see the famed Crater Lake. I also must admit, until very recently I thought the crater was formed by a meteor’s impact. Turns out, it was formed after a giant active volcano imploded. Regardless, Crater Lake is one of the most majestic places I have ever seen.

You can easily spend an entire day driving and hiking around the lake. One of my favorite parts was the hike down to the lake, where you could actually jump in the pristine blue water. Unlike most other hikes, the hike back up the 6,000 ft elevation is the hardest part (especially after enjoying a local IPA), but it is well worth it.

After exploring the lake we set up camp at Crater Lake’s campground, Mazama Village. This was definitely one of the more beautiful campgrounds I have been to and totally different than our river camping near the Deschutes. The campsites were fairly spread out with the lush forest giving a sense of privacy. It got pretty cold at night, which was fine because we had a big fire to warm up to, except it did result in me wearing socks with Keens… never again. 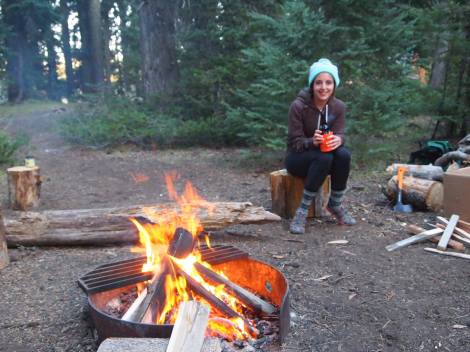 To make the campground even cooler, it is actually a stop on the Pacific Crest Trail so you might be able to catch some PCT hikers enjoying a well-deserved cold beverage. After reading the book “Wild” by Cheryl Strayed I have a newfound appreciation for the PCT, so was nearly in awe when I saw packages in the post office for the hikers.

I’ll end this post with my favorite quote of the book: “How wild it was, to let it be.”